A Day in the Hop Kilns 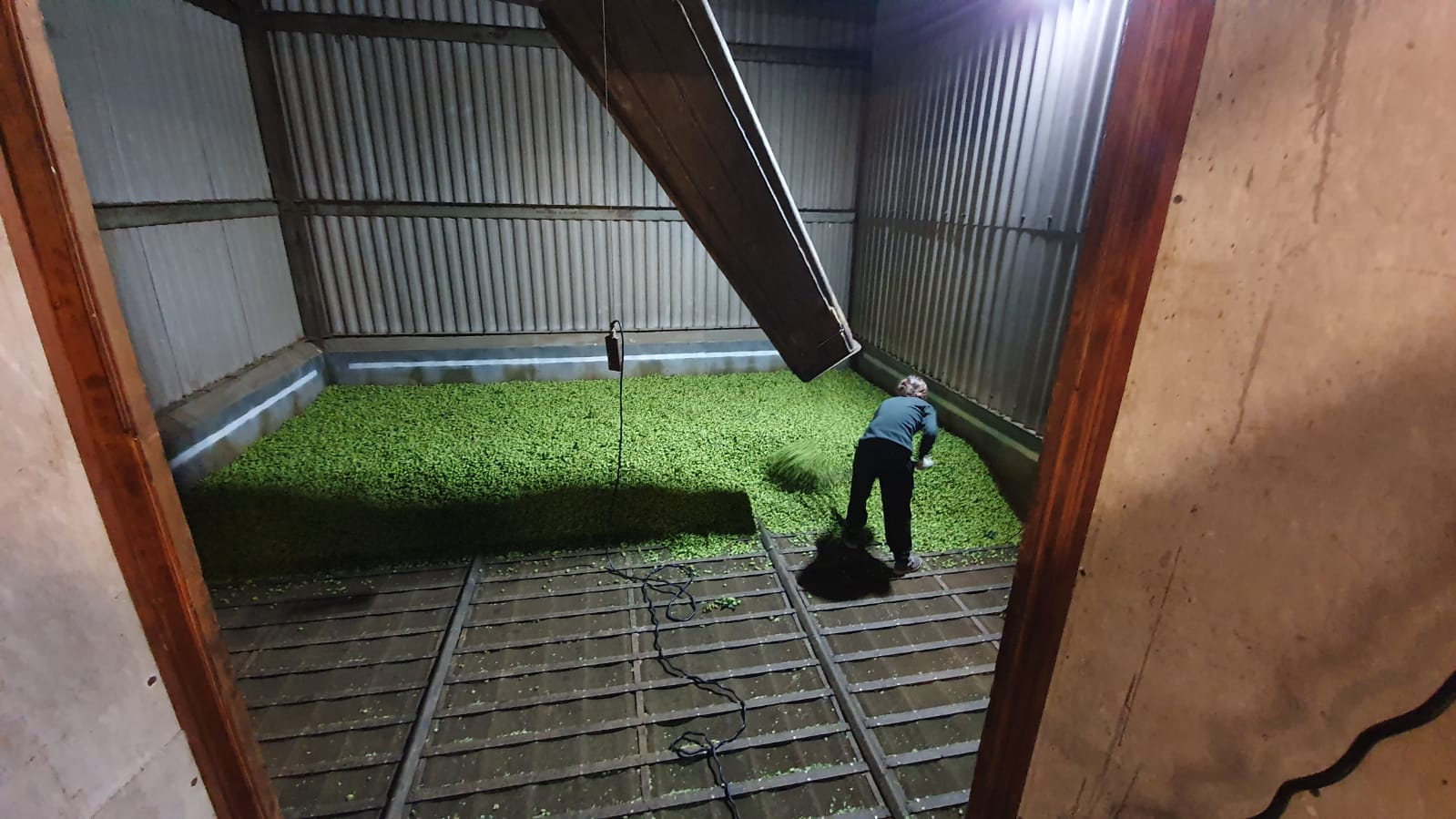 The day starts at 6am with a berating alarm that gets more and more unwelcome each morning. The first hour is spent preparing the same Hop picking machine that has been picking our hops in the Frome valley for over, forty years. After the team have arrived I retreat back up into the main drying building and prepare the elevators that feed hops to our kilns.

The bines are then hauled back to our central picking facility where each bine is individually hung by hand onto a bine track that guides them through the first part of the picking machine, the PLUCKER BANK. This is where all the cones and leafs are stripped from the bine before they go on to be separated further in order to remove as much leaf and twig matter from the hops as possible.

Once the hops have gone through the cleaning belts they make their way up into the kilns to be loaded via a main gantry elevator. On our farm the kiln loading is still an extremely manual process and all of the hops are levelled by hand using a fork so they are a consistent depth. It is important that they are not compacted together forming “tight spots” as these prevent the hops from drying evenly. If this has been allowed to happen they are discovered later as “cold spots” on the conditioning floor and have to be extracted and re-dried.

By 11 o’clock we have usually filled the first 3 kilns and it is time for the mandatory sausage sandwich that keeps us all going. We feel it is important to dry the hops slowly, especially on a wet day, using lower temperatures and a high fan speed in order to keep the heat moving up through the hops. This prevents them from stewing and preserves the oils while reducing the moisture levels making them less volatile in store. On average it takes nine hours to dry a load of hops.

We have a “two tier” kiln system that allows two loads of hops to be dried one over the top of the other. There is a tipping floor in the top level of the kiln. The first part of the drying period is spent on the top level until the hops have “feathered”. This means that there is a slight rustling sound from the petals on the outside of the cone, similar to that you would hear from a pile of dried leaves, when tapped with our kiln stick. Then the floor is tipped and the hops fall into baskets on the lower level where they spend their last hours drying reducing the moisture from the core of the cone, at the same time the fresh top load begins to dry. All of our hops are still dried to “feel” with only a little guidance from temperature probes above and below the kiln tiers. Once dried the hop baskets are pulled out by hand and left to cool on a large conditioning floor for a further 5 hours at least before the baskets go on to be tipped into a hopper in the floor and then baled. We feel this resting period is extremely important for stabilising the moisture levels of the hops that go on to make great beer.

By the time we have finished feathering the last load of the day, by which point the hops are stable enough to be dropped to the lower level of the kilns and left over night it is time for bed. During the picking season at least two of us will sleep in the hop kilns at any one time, it is usually between 12.00 – 1.00am by the time we manage to get to sleep ready for the next busy day ahead.